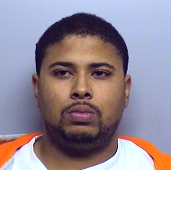 On April 22, 2008, Frederick Wilson and his girlfriend were at their residence in West Tulsa County. At approximately midnight two intruders donning masks entered the residence at the 4000 Block of West 45th St. During the robbery both victims were bound and before leaving the residence Wilson was shot and killed. The suspects in this case were described as two black males; one wearing brown work boots and the other suspect was soft-spoken with braids.